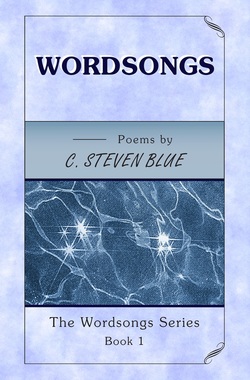 WORDSONGS, the first album in The Wordsongs series, has as its theme, the story of a young man living in the inner city who dreams of freedom and true love. Follow his journey as he struggles with the concept of freedom, finds then loses his first love and discovers himself in the process. Will he find love again? The answer is inside—in the first and original WORDSONGS.

​
​The Wordsongs Series
Each book in this series contains 20 pieces designed to be similar in scope to a music record album, with side one and side two, but instead of songs it is comprised of a style of poems that are called wordsongs™. Each book is a concept album, with a general theme running through it, told in verse format.

Wordsongs™ are the original creation of C. Steven Blue, who also created a definition for this concept:

word’song, n. [AS. wordsong.]
1. a poem that is like a song or could be a song
2. verses that tell a story in song-like rhythm, often with a refrain
3. a song that you read
If you purchase WORDSONGS here, it can be signed by the author.

If you purchase the print version on Amazon.com, you can get the Kindle/eBook version for free: WORDSONGS/Amazon.
*Website Exclusive Extra*
To see a video of C. Steven Blue performing a poem from this book, go here:
"Oh Big Sky"